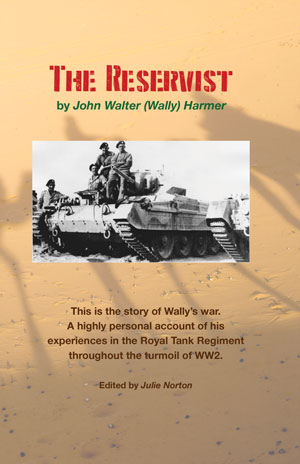 “‘Sergeant, we lost eight drivers in that do. Can you train another eight by the end of the week?’

"I knew I was training men to die.”

The sergeant is Wally and this is the poignant story of his perilous journey through World War Two. Wally is ‘old’ at 30, in charge of raw young men, some still in their teens.

He is caring and sympathetic to his charges, but contemptuous of many officers he sees as unfit to lead.

Wally has many lucky escapes under fire and survives the arduous years of conflict, seeing action in France, including Dunkirk, and North Africa, Italy and Sicily.

Despite this his only physical war wound is a scratch on his nose when the impact of a shell throws him to the ground.

Wally’s war isn’t all doom and gloom. His enduring sense of humour shines through his anecdotes of day to day tasks and encounters. But the relentless succession of harrowing experiences, of seeing the men he’s trained die in front of him, takes its toll.

He is invalided out with what is now called post traumatic stress disorder.

That was on VE Day. Wally had managed to survive until the end.

Available now in paperback and kindle versions from Amazon Books, price £11.79 and £3.14 repectively.