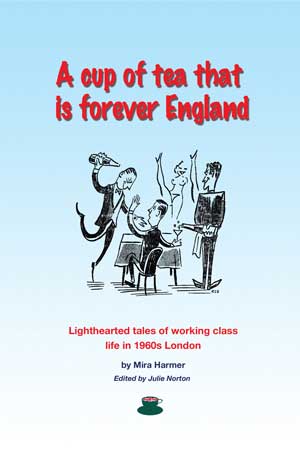 These charming tales from 1960s London provide a unique insight into the everyday life of working class families at a time when much of the country was obsessed with pop culture and the new social freedoms that came hand in hand with the advent of the contraceptive pill.

The stories, which are based on real events which happened during Julie Norton's childhood, were written by her mother, Mira Harmer, between 1965 and 1970, and appeared in the Daily Worker/Morning Star, where she worked as a feature writer.

Funny, perceptive and at times poignant, this is a first hand account of the day-to-day lives of working people at a time when the media tended to concentrate on the antics of cult personalities such as Mary Quant, Twiggy and the Beatles.

The stories are based on real events which Julie remembers from her childhood, and in places she's added her own comments and observations.

A cup of tea that is forever England is available from Amazon in paperback and Kindle editions, price £5.26 and £5.00 respectively.